My last posting was about using my RIGOL Spectrum Analyzer with frequency range up to 1.5GHz to show characteristic of a 10GHz filter. That little test made me wonder if I can use the same Spectrum Analyzer to display a signal in the 10GHz range on that analyzer. Obviously, I have to mix the signal down below 1.5GHz using a transposing signal from another synthesizer.

I have used my 24GHz transverter with 11.88GHz local oscillator, because that signal is conveniently fed to a connector on the transverter's front panel. The same mixer from my previous test (IF range only 0-150MHz) was used for the first test today: 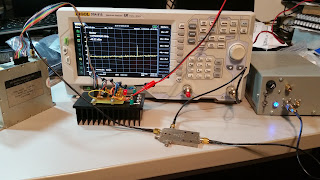 Yes! It really works! My ELCOM on the left side is programmed to 10.805GHz (+13dBm) and the gray transverter on the right side delivers 11.88GHz (+10 dBm). Difference of these two signals is exactly 1.075GHz which is what we see on the analyzer. What we also see is the signal level below -40dBm. Hmm ...

I have tried to "zoom in" and changed the RBW ratio on my RIGOL from 1MHz to 300kHz. Signal still looks nice and clean, just not too strong: 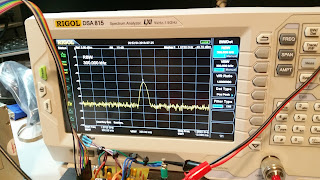 Can we do something about the attenuation? Of course we can. I tried 3 things:
Luckily, I have bought good sized bundle of these flexible black cables with SMA connectors cheap on eBay. Maybe I could find some better pieces in that bundle? Tried and ... the signal strength improved +30dB: 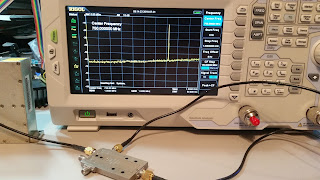 Wow! This is almost perfect! Maybe Semirigids will make it even better: 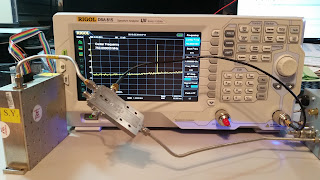 Hmmm, not too much. Only about 2dB. Surprising, really. These black cables are RG-178 which is OK but not as good as semirigid, at least in theory. Whatever ... let's try another mixer: 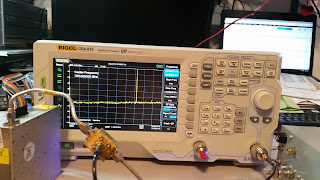 Nice! Improvement about 8dB! This mixer has IF range 0-2GHz, but it has apparently been exposed to salty water somewhere. I have bought it cheap on eBay. Lets try better one: 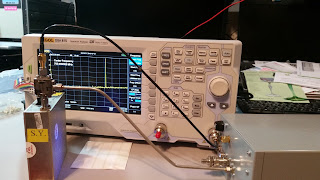 No surprise here, less than 2dB below zero. This mixer behaves as expected. Note that I am feeding it LO signal 11.88GHz about +10dBm and the test signal is 10.8GHz about +13dBm. My RIGOL has internal attenuator of 10dB, so the conversion loss in this case is 13 - (10-2) = about 5dB. That is certainly very acceptable!

My next test will be with a Harmonic Mixer (same thing, but the mixer will generate harmonics from a strong base signal to be able to display higher frequencies, such as 24GHz). But that will be the topic for some other day.

Posted by Herbert ULLMANN at 4:04 PM 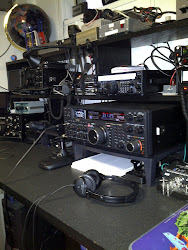